I don't think I have a sort of mission because I'm an artist.

It goes straight to the point and can be very harsh sometimes, even more than words in my opinion. The best example I can think of is press cartooning, which I'm very fond of. I'm sure press cartoonists have a great deal of interesting things to say but they aren't promoted enough—at least in French medias—because their message is too strong, sometimes too violent. We prefer promoting that singer's new album similar to the hundreds that came before...

A bit like press cartoonists I like to hint messages with my work. The example that comes to my mind is a recent one I created for the 2014 World Cup. I did a piece criticizing the money that revolves around football, drawing Brazil’s favelas being crushed by a massive wad of notes.

I don't think I have a sort of mission or something because I'm an artist. I'm just adding messages to my work because I like it but I'll never force myself if I have nothing to say.

I don't think everyone can and should include messages in their work. You have to get a sort of maturity to be able to do so. Until recently I'd only design purely esthetic pieces but my work is increasingly carrying a strong message and I think I'm enjoying it... Sometimes the message is very clear and sometimes I let people read into it whatever they like.

My designs are more and more famous, in the last year or two everything has been growing at lightning speed. I suppose it's mainly because I waited enough time before showing my work out there. I waited to get enough maturity. I think the risk with publishing your work too early is that people get bored of what you produce and they won't listen anymore the day your work gets a real value.

If I look at my work 6 years ago, I'd say it's bullshit. I'm not very proud of that work, to say the least. But I practised, I got better by getting feedback from my friends and family and once it was good enough for me, once I was proud of what I was producing, I decided to release it. For me it's the best way to proceed. I'm glad it worked!

Piece created in 2014 by Pez for the association "Enfants des favelas Brésil" to criticize inequalities and the impact of money during the 2014 FIFA World Cup. 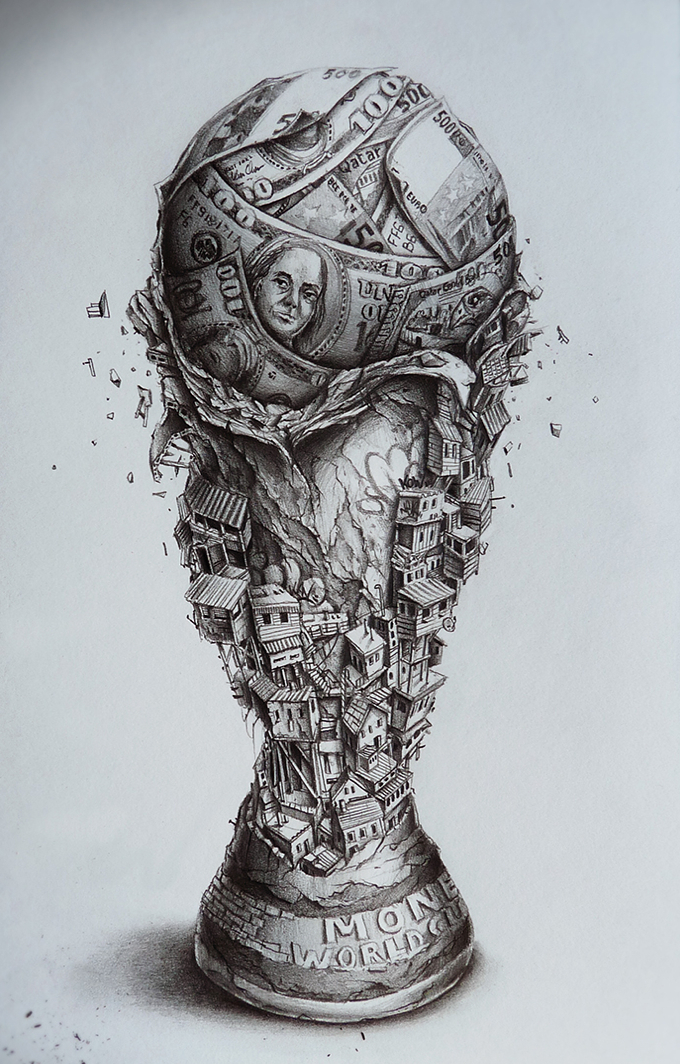 Help us spread the word

PS: We think Pez deserves it. Don't you?

Ready to tackle the world.

I was doing craft with my son.

Punk rock was my entry into design.

I secretly hoped that this hobby would eventually turn into a job.

Mixing my two passions - art and music - into a job.

We are all just winging it.